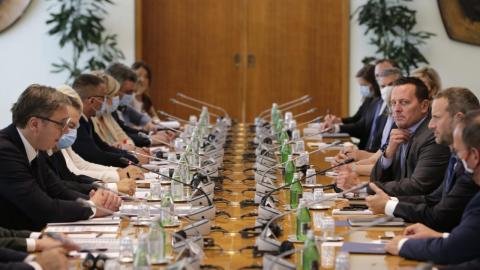 Richard Grenell, the US Special Presidential Envoy for Serbia and Kosovo Peace Negotiations, met officials in Belgrade and Pristina on Monday and Tuesday in a visit he said was focused on "the economy and new jobs as priorities".

Grenell's visit came after agreements were signed at the White House in Washington earlier this month between Serbia and the US and between Kosovo and the US, mainly focusing on economic issues.

"What we did in Washington was great, and it is great, but the job is not finished," Grenell told media in Belgrade, N1 reported.

"Where Americans come, where Americans want to invest, where the American Development Agency is, there is a future and those are good signals and symbols for such a country, for such a region," Serbian President Aleksandar Vucic said after he and Brnabic met Grenell.

Thank you @SerbianPM⁩ for a wonderful 🇷🇸welcome to a robust and exciting 🇺🇸 team sent by ⁦⁦@WhiteHouse⁩.

Prior to meeting Vucic and Brnabic, the US delegation met representatives of the Chamber of Commerce of Serbia. Afterwards, Grenell said that governments should realise that they don't create jobs but "the private sector does it".

He also said that US President Trump is "willing to come to Serbia".

Meanwhile, Bohler said that he arrived in Serbia with...