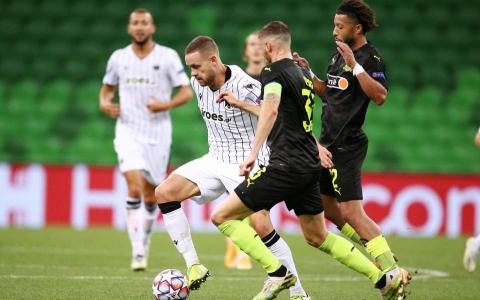 PAOK was unable to turn its dominance into more than one goal at Krasnodar and is now trailing 2-1 to its Russian host after the first leg for the Champions League playoffs on Tuesday.

In the first 35 minutes PAOK caused all sorts of problems to the hosts' defense. Dimitris Pelkas missed a sixth-minute penalty, that Krasnodar keeper Matvey Safonov parried, but just after the half-hour mark Pelkas redeemed himself scoring the opening goal with a powerful shot from close range.

Six minutes later Dimitris Giannoulis conceded a penalty for a tackle on Remy Cabella, and Viktor Claesson equalized for the Russians from the spot.

In the second half PAOK was also the better team, but two minutes after PAOK's Omar El Kaddouri struck the woodwork, Markus Berg fed Cabella and he gave Krasnodar a 2-1 lead in the tie.

The return leg is taking place in Thessaloniki on...