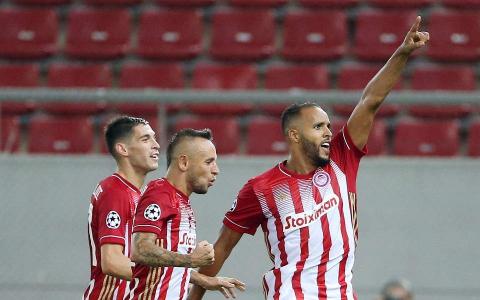 Olympiakos has taken a leap toward another campaign at the group stage of the Champions League, beating Omonia Nicosia 2-0 in the first leg of the competition's playoffs on Wednesday in Piraeus.

After more than an hour of frustration Olympiakos managed to find the way through the Omonia defense, first via a penalty and then courtesy of a beautiful strike by last season's top scorer Yussef El-Arabi.

The tight defense of the Cypriot team coached by Henning Berg had Olympiakos pegged at a goalless draw up to the 69th minute at the quiet Georgios Karaiskakis Stadium.

However the introduction of Lazar Randjelovic and El-Arabi on the 58th minute did the trick for Olympiakos coach Pedro Martins. Ten minutes later Randjelovic forced Omonia commit a handball in the area, and Mathieu Valbuena converted the penalty for 1-0.

The Reds kept pushing, but the second...