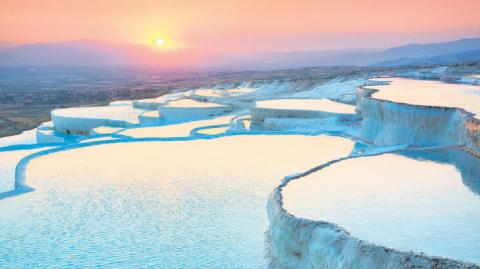 Over 3 million tourists visited historical places in Turkey in the June-August period of this year as travel restrictions related to the novel coronavirus eased.

This summer, domestic and foreign tourists preferred to visit mostly historical sites rather than museums due to the pandemic, according to the information obtained by Anadolu Agency from the country's Culture and Tourism Ministry.

Hierapolis-Pamukkale ancient city is the most visited place with over 230,000 visitors.

The Mevlana Museum, located in Konya, drew a total of 3.47 million domestic and foreign tourists last year, becoming the country's number two museum destination after the Hagia Sophia in Istanbul.

The other popular destinations are Olympos in Turkey's southern resort city of Antalya, Sümela Monastery in Turkey's Black Sea region and ancient city of Ephesus in the picturesque Aegean region.

After February, Turkey postponed the tourism season to June and canceled a number of events such as fairs and expos.

With the normalization process starting in June, tourist facilities in Turkey reopened with rigorous measures to ensure safety of...