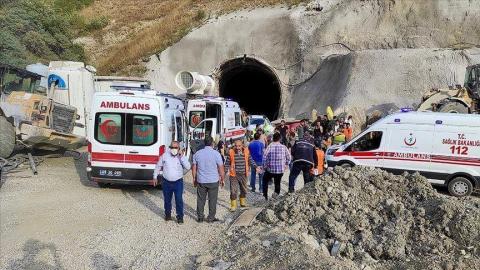 A blast injured at least 11 people on Sept. 24 in a highway tunnel construction site in northeastern Turkey.

According to local authorities, initial findings showed that the explosion was caused by gas trapped in the tunnel under Mount Kop on the highway between the provinces of Erzurum and Bayburt connecting Eastern Anatolia to the Eastern Black Sea.

The Disaster and Emergency Management Authority (AFAD) and health teams were deployed to the area and ambulances rushed the injured to nearby hospitals.

Bayburt governor Cüneyt Epcim told Anadolu Agency that no one was trapped inside the construction site.

"Some of the injured suffered burns on their bodies due to the explosion," Epcim said.

He noted that according to initial reports, there were eight injured, though the number had increased following searches in the area, with non in critical condition.