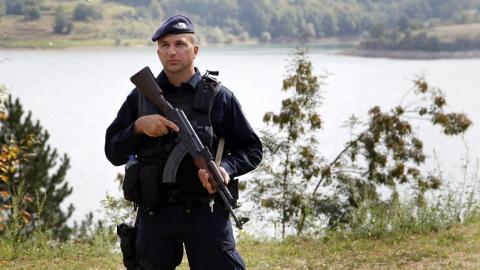 Kosovo Prime Minister Avdullah Hoti has welcomed a proposal to rename a disputed lake in the country "Lake Trump" in honour of the US President - who recently presided over an economic normalization deal in Washington between Kosovo and Serbia.

On Thursday, Hoti wrote on Twitter that the US special envoy for the Kosovo-Serbia dialogue, Richard Grenell, had proposed that Lake Ujman [in Albanian], or Lake Gazivoda [in Serbian] be renamed after Donald Trump in honour of his "role in reaching a historic economic normalization agreement between" Kosovo and Serbia in September. "I welcomed Amb Grenell's proposal," Hoti tweeted.

However, the decision to rename the lake after President Trump has left Kosovo officials surprised, as they were unaware of the legal procedures on such name changes.

Serbia has also not given its consent to rename the disputed lake after Trump while one EU official called it a joke.

Uran Haxha, a spokesperson of the Kosovo Ministry of Economy and Environment, told BIRN on Friday that he had only heard of the decision through the media. "I know as much as you have read on the social networks of the Prime Minister," he said. He added that the ministry "not aware of an official process to change the name".

The strategically important reservoir in the north of Kosovo is claimed by both Serbia and its former province, which unilaterally declared independence in 2008.

It created in the 1970s, when Kosovo and Serbia were both part of socialist Yugoslavia. Lying mainly in the mainly Serb-populated and Serb-run north of Kosovo, it is the main source of drinking water for around a third of Kosovo's 1.8 million people. Kosovo and Serbia both claim they were responsible for the construction of the lake.