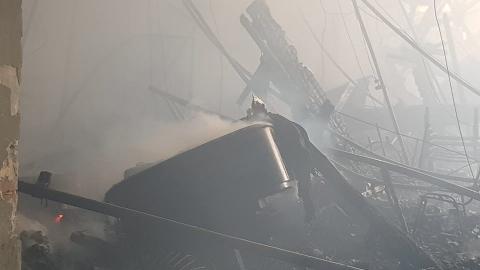 A huge fire, which broke out on Thursday, has burned much of the interior of the Serghei Lunchevici National Philharmonic building in Chisinau, which was built in 1912 when Moldova was part of imperial Russia.

Police closed traffic on nearby streets, and ten trucks and about 50 firefighters came to the scene to try to fight the flames.

The firefighters worked for seven hours to put out the fire on Thursday afternoon and were still there on Friday morning.

According to the Emergency Situations Inspectorate, the flames burned an area of about 3,500 square metres, reducing much of the interior to ashes.

The concert hall after the fire on September 24, 2020. Photo: Moldovan Government Facebook

The flames spread and also destroyed the roof of a nearby restaurant.

The chief conductor and artistic director of the Symphony Orchestra at the National Philharmonic, Mihail Agafita, wrote on Facebook that the fire had consumed everything, including the musical instruments.

A fireman trying to put out the blaze. Photo: Moldovan Government Facebook

Opposition leader Maia Sandu wrote that the country would "identify the necessary resources and rebuild the National Philharmonic" but also blamed the ruling parties and President Igor Dodon for spending more money on their own offices than on cultural buildings.

The EU Embassy in Chisinau reacted promptly to the disaster, expressing solidarity with the people of Moldova.

The main entrance of the Philharmonic. Photo: Moldovan Government Facebook

"Friends, you are not alone in these difficult times! We are and will remain with...