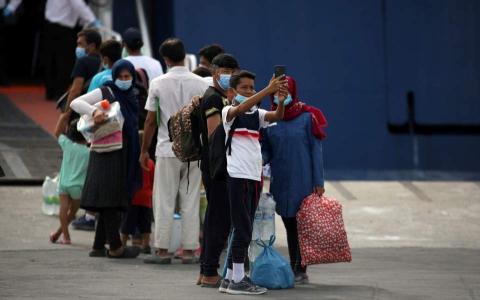 Some 700 migrants left a temporary shelter on Lesvos on Monday and boarded a ferry to the mainland, the first stage of the planned relocation of 2,500 asylum seekers from the eastern Aegean island.

After collecting the 700 migrants from Lesvos - mostly families or members of vulnerable groups - the Nisos Chios passenger ferry had been due to collect another 300 people from Chios, Samos, Leros and Kos.

The migrants are to be put up in accommodation on the mainland as part of the Helios program which the International Organization for Migration is running in association with the Greek government.

There is a particular focus on easing the pressure on Lesvos, where the sprawling Moria camp was destroyed by three fires earlier this month. Most of the 12,000 people displaced from Moria were moved into a temporary shelter after the fires.