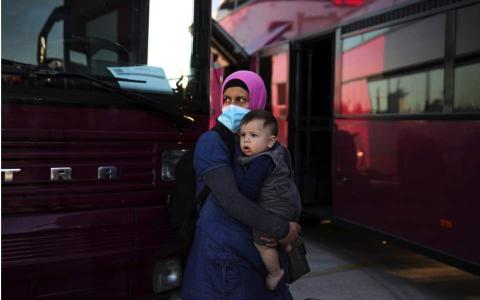 Most of the 946 people on a ferry that docked at Lavrio, near Athens, had been at a temporary facility hastily built on the island of Lesvos to replace a camp that was burned down by angry residents three weeks ago. Others came from camps on Kos, Samos, Chios and Leros.

The transfer from the Greek islands of people whose asylum bids have been accepted will continue over the coming weeks and months, the country's Migration Ministry said Tuesday.

Just over 26,000 refugees and migrants live in camps on islands, where they arrived after crossing from the nearby Turkish coast in smuggling boats. More than half are on Lesvos.

Greek officials have pledged to drastically reduce the islands...