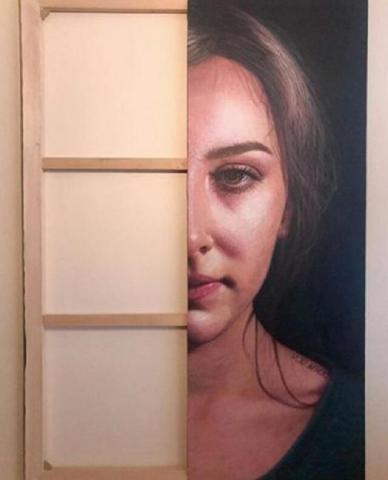 A collector looking to purchase an artwork from Turkish painter Ali Leblebici for half the price in aid of a pandemic discount has received the piece half cut.

Leblebici has sent a buyer one half of his portrait named "MMXI," after the collector demanded a 50 percent discount, citing the pandemic. The artist agreed to the discount, but cut his work into two and sent one half to the buyer.

Leblebici shared a photo of his work on Instagram.

"Last week a collector contacted me to buy this painting," the painter wrote.

"We talked on the phone about the pandemic, the situation in the art market and that sales have slowed down. He said that the price of my work was high in this context and that I am an independent artist and should not have a gallery sales share. I agreed."

Leblebici said the collector's remarks "hurt me like a dagger."

"I also made a 50 percent discount at the request of the collector," he added.

"Of course, what the collector could not foresee was that I would only give half of my work. I cut the work in half, packaged it and sent it. After a few days, he called me in great panic and said that half of the canvas was cut. His voice was trembling. I summarized why I cut the canvas, 'The art market is not good, sales are at a standstill, I do not have a gallery where I am represented, I am an independent artist and the pandemic of course.'"

A source with knowledge of the matter told daily Hürriyet that the collector sent the piece back. The artist wants to keep the portrait, which was up for sale for 17,000 Turkish Liras ($2,170) before it was cut in half, the source added.

While some users likened him to the anonymous...