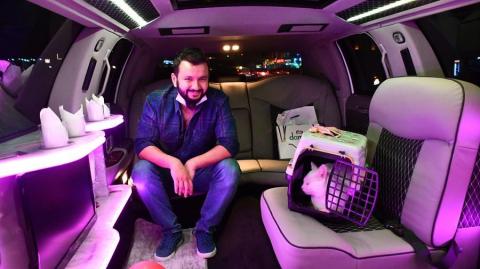 A veterinarian, İbrahim Özmen, who organized a cat beauty contest in the Central Anatolian province of Sivas for the second time, has awarded a limo-ride in the city to the winner cat and its owner.
"It was marvelous to tour the city in a limo with my cat," said Hüseyin Cebecioğlu, the owner of the cat named Mahir, on Sept. 28.
Talking about the story of the cat contest, Özmen told state-run Anadolu Agency, "I took photos of the cats that were brought to my clinic and then uploaded them on Instagram where around 10,000 people voted to determine the 10 finalists."
The contest took place in a hotel's ballroom on Sept. 28, where 10 finalists were judged by the jury for their talent and bond with their respective owners.
By the end of the day, the majority of the jury selected Mahir as this year's winner of the cat beauty contest.
"This year, we chose 'The world is so meow' as the slogan of the contest. People liked it," said Özmen, thanking the participants who showed huge interest in the contest.
"The winning award was a limo-ride in the city. The winner cat and the owner were so happy," added Özmen.
The veterinarian also promised free parasite controls on the three cats who got the best votes besides Mahir.