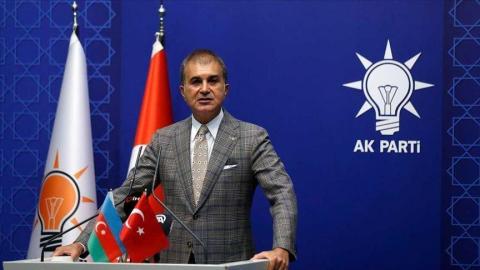 China's practices and policies toward Uighurs and the Muslim minority in Xinjiang has always been part of Ankara's agenda, Turkey's ruling party spokesman said on Sept. 29.

Speaking at a news conference, Ömer Çelik said Turkey has been closely monitoring human rights and freedom of belief and that China's anti-extremism regulation adopted in 2017 contains negative and arbitrary practices against Uighurs - who are of Turkic origin and a Muslim minority.

The ruling AKP spokesperson said the international community has its eye on practices such as arbitrary detentions, limitations of religious freedom and forced-teaching of Chinese, and U.N. reports about these issue had worrisome aspects.

"Our sole desire on this issue is that Uighur Turks live in prosperity and peace, and contribute to China's development, social peace, prosperity, security as equal citizens," he said, while noting that Ankara has repeatedly urged Beijing to respect the rights of Uighur Turks and minorities.

"Turkey supports the one-China policy. We, of course, respect the territorial integrity and sovereignty of China," he said.

But, he said, "the practices Uighur Turks face cannot be evaluated in this context. A serious distinction needs to be made between terrorists and innocents."