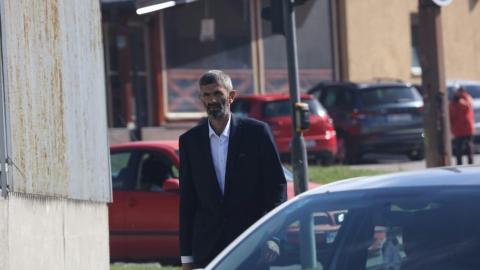 The Bosnian state court in Sarajevo on Wednesday convicted Boris Bosnjak, Miodrag Grubacic and Ilija Djajic of the abuse of non-Serb civilian prisoners at the Mosa Pijade barracks in Bileca during wartime in 1992.

In a first-instance verdict, the court sentenced Bosnjak to ten years in prison, Grubacic to five years and Djajic to six years.

"Bosnjak as a de facto warden, and Grubacic and Djajic as guards, committed physical and psychological abuse and other inhumane acts against detainees," said presiding judge Jasmina Cosic Dedovic.

Cosic Dedovic said that all three men were members of the Bosnian Serb Army.

A fourth defendant in the trial, Milos Mavrak, was acquitted because the court could not determine whether or not he was a guard at the camp and abused detainees.

Cosic Dedovic said that the court had established that the victims were civilians, who had been detained at their homes and taken to the barracks, part of which was used as a detention camp.

She said that Bosnjak, Grubacic and Djajic had intentionally abused the prisoners, and that there was no doubt that they had created and maintained the inhumane conditions in the camp.

The verdict stated that the Bosnjak inflicted physical and mental pain on the detainees, beating them and attacking them with an electric baton.

He was also convicted of one case of forcing prisoners to have sexual intercourse with each other.

Grubacic, together with two other unknown soldiers, participated in the abuse of three detainees, and Djajic was convicted of four counts of inflicting physical and mental pain on detainees, the verdict said.

Cosic Dedovic said that the defendants had initially been charged with crimes against humanity, but the basis for...