Harsh Words on EU Rule of Law but Will Action Follow? 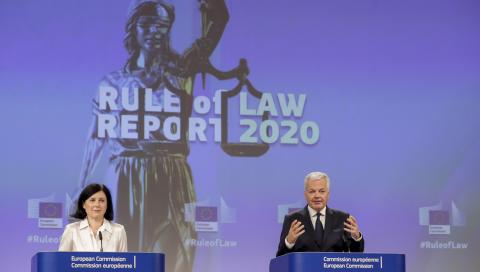 The Commission says the annual Rule of Law Report - which covers four pillars: the justice system, the anti-corruption framework, media pluralism, and other institutional issues related to checks and balances - provides a process for an annual dialogue between the European Commission, the EU Council and the European Parliament, together with member states as well as national parliaments, civil society and other stakeholders on the rule of law across the entire bloc.

"We listened to the calls from Poland and Hungary who for a long time were telling us, 'look at other member states, compare all the systems', and the Commission agreed with the need to have a better and broader picture on the rule of law situation in all 27 member states," European Commission Vice President for Values and Transparency Vera Jourova said at the report's launch in Brussels.

Anticipating the fierce criticism of his country in the report, Hungarian Prime Minister Viktor Orban on Tuesday got his retaliation in first, lashing out at Jourova for calling Hungary an "ill democracy" and demanding her resignation. Hungary and Poland also announced on Monday the setting up of a Polish-Hungarian institute to look at the rule of law in other countries to counter EU attacks on their records.

Hungary did feature prominently in the overall report on the rule of law situation in the EU, though it was notable that most of the other new member states in Central and Southeast Europe also warranted mentions. In fact, according to an analysis by Politico into the number of "concerns" or "serious concerns" that appear in each country's report, it was Poland that came out top with 30 mentions, followed by Bulgaria with 19, Austria with 16, Romania with 15 and Hungary with 12. Slovakia and...