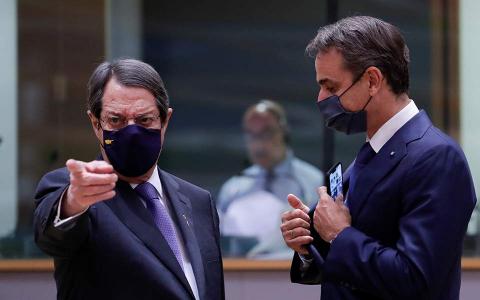 The leaders of Greece, Cyprus, France and Germany were meeting with European Council President Charles Michel and European Commission President Ursula von der Leyen late Thursday in a bid to reach a compromise on the conclusions of an EU summit in Brussels regarding Turkey.

According to sources, Greek officials insist that a reference to a prospective talks between Athens and Ankara must be coupled with a warning that sanctions will be imposed against Turkey should it fail to take active steps toward a de-escalation of tensions in the Eastern Mediterranean.
German Chancellor Angela Merkel is against the idea of including a reference to possible sanctions, also on the grounds of NATO's announcement earlier in  the day that Greece and Turkey have set up a mechanism (so-called deconfliction mechanism) to avoid accidental clashes in the Eastern Mediterranean.
Athens...