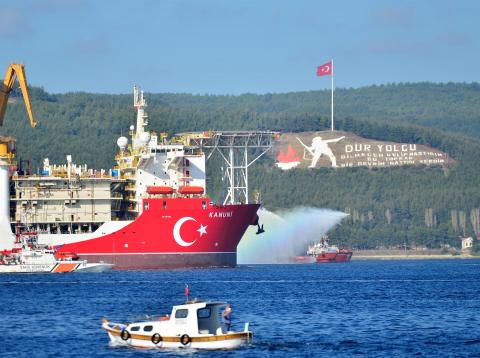 Turkey's giant natural gas discovery in the Black Sea revised to 405 billion cubic meters (bcm) with the new 85 bcm of reserves in the Sakarya gas field taken into account could meet 100 percent of the natural gas consumption of 14 million Turkish households for about 25 years.

Turkish President Recep Tayyip Erdoğan, after announcing Turkey's biggest gas discovery in its history with 320 bcm in the Black Sea, relayed on Oct. 17 that with the addition of the supplies which the Fatih drillship reached in the new Sakarya gas field, accumulative field reserves now total 405 bcm.

This amount is almost 25 times higher than the country's overall gas production on record which stood at 16.6 bcm by the end of 2019, and based on current price trends is worth between $85 and $90 billion.

Taking into consideration Turkey's annual gas consumption of around 45 bcm, the total reserves are estimated to meet the country's total gas needs for around eight years. However, technically it is most unlikely that this amount could be produced on an annual basis, as gas field production typically increases gradually over its years of production to eventually reach peak output.

Turkey plans to start natural gas production of between 5-10 bcm annually starting from 2023. The field is expected to reach plateau production of around 15 bcm in 2026.

Yaşar Arslan, the head of the Natural Gas Distribution Companies Association of Turkey told Anadolu Agency that Turkey would be able to meet 100 percent of its household gas needs for almost 25 years through its own resources.

"A Turkish household consumes 1,000 bcm annually and currently 14 million households are using natural gas in all cities of the country," Arslan said.

Turkey plans to build a...