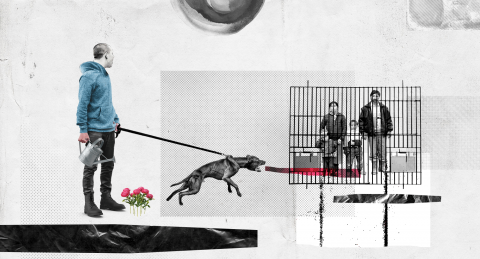 "It took me more than a year to discover and understand that Levijatan isn't quite as caring as it makes out and that behind the protection of animals stands the spread of intolerance of and hatred towards different social groups," Anastasija, who declined to give her surname, told BIRN.

In fact, with more than 220,000 followers on Facebook and roughly 22,600 votes in Serbia's last parliamentary election in June, Levijatan is the latest offshoot of a Europe-wide phenomenon that has appropriated the fight for animal rights in the service of a far-right political agenda targeting minorities.

But while 'far-right ecologism' - as PhD candidate Balsa Lubarda of the Central European University, CEU, calls it - can be traced to underground movements of the 1960s and 70s, its newest practitioners are encroaching on the mainstream in countries like Serbia and Hungary, where their discourse frequently dovetails with the policies espoused by increasingly authoritarian and populist governments.

"The whole spectrum of right-wing politics is invariably actually contributing to thinking about the environment, thinking about ecologically sustainable politics and that link is exactly what far-right and right-wing populism is now trying to play on, given the salience of the topic," Lubarda said in an interview.

Via grassroots activism, they seek to influence public policy and infiltrate state structures. Far-right parties with similar interests in the environment are represented in parliaments across Europe.

Where Levijatan traces its founding five years ago to the rescue of a tortured pit bull called Grof, the Hungarian organisation Szurkolok az allatokert [Sports Fans for Animals] began...