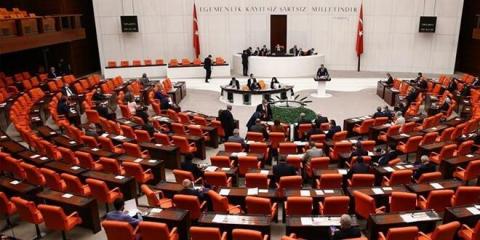 The Turkish Parliament has adopted a bill proposed by the ruling Justice and Development Party (AKP), increasing the fines on those who don't comply with the prohibition on selling alcoholic beverages late at night.
An administrative fine of up to 320,000 Turkish Liras ($40,000) will be imposed on retailers who sell alcoholic beverages between 10 p.m. and 6 a.m., with a new regulation in the field of food, agriculture and forestry.
The fine also covers retailers selling alcoholic beverages to individuals under the age of 18.
In the event that the prohibition is violated three times within a period of five years, all the alcoholic beverage sales licenses of the relevant person or company will be canceled, and a new license will not be issued until the next two years from the date of cancelation.
In 2013, a regulation restricted the sale of alcoholic beverages, banned all alcohol advertising and promotion, and stopped new shops and bars from opening within 100 meters of schools and mosques.
Opposition lawmakers slam taxes on alcohol
Meanwhile, opposition lawmakers have criticized the taxes on alcoholic beverages during discussions on the bill as the death toll from alcohol poisoning rose to 71 on Oct. 22.
Main opposition Republican People's Party (CHP) lawmaker Okan Gaytancıoğlu has claimed that many people in Turkey became "chemists" due to high taxes on alcohol.
"A person takes an alcohol meter and tries to make alcoholic drinks at home. The right way to follow is to spread awareness among the people regarding alcohol consumption," Gaytancıoğlu said.
"Making it difficult to intake alcohol and tobacco products should not be seen as a measure to reduce use," said opposition İYİ (Good) Party lawmaker Ayhan...