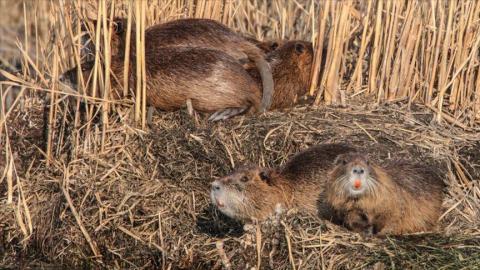 Groups of coypus, a semiaquatic rodent species from Latin America, have frequently been sighted in the Mount Ağrı (Ararat) National Park in Turkey's east, endangering the region's water supply and threatening to destroy the habitats of other living creatures.

The coypu, also known as water monkey by locals, resembles a very large rat or a beaver with a small tail and can weigh up to nine kilograms and consume up to a quarter of that mass daily in riverbank plants.
The life of this invasive species, seen at the foot of the country's largest mountain, will also feature in a documentary to be broadcast on Turkey's state-owned television channel TRT.

TRT teams and Kuzeydoğa Association, an environmental non-governmental organization, which closely monitored coypus in line with a project, have recorded the behaviors of the animals, from feeding to their daily life.

But it is still a mystery how this species, which does not belong to the Anatolian ecosystem, roams at the foothills of Mount Ağrı.

It is believed that the species had once escaped from farms established in Armenia to meet the fur needs of the people of the Soviet Union and later settled in the rivers within the Turkish borders.

"This species, which is grown in fur farms in neighboring countries, has spread by breeding due to their escape from these farms and getting exposure to nature," said Çağan Şekercioğlu, the head of the Kuzeydoğa Association.

"We think that they escaped from fur farms in Armenia and spread to the Aras River Basin," he noted.

The fact that the same animals were spotted in the rivers in the northwestern province of Edirne, which borders Bulgaria, another former eastern bloc country, strengthens the argument.