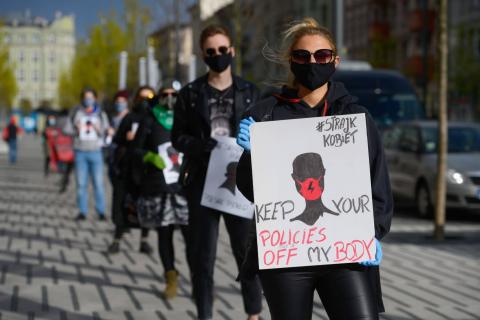 "Today's judgement puts the health and lives of women in Poland at great risk and violates Poland's obligations under international human rights treaties to refrain from retrogressive measures that roll-back women's rights to sexual and reproductive health care," said Leah Hoctor, regional director for Europe at the Center for Reproductive Rights, in a statement. "Poland must act now to bring its law into line with other EU member states and legalize abortion on a woman's request or broad social grounds, and guarantee women's full and effective access to care in situations where women's physical or mental health is at risk."

The Constitutional Tribunal in Poland is widely thought to be controlled by the ruling Law and Justice Party (PiS), with Court President Julia Przylebska known to be a personal friend of PiS leader Jaroslaw Kaczynski. The ruling today comes as a result of a request filed in 2019 by a group of parliamentarians from PiS and the far-right, who asked the Tribunal to rule on the constitutionality of the legality of abortion in cases when the foetus is very sick or disabled.

Thousands of people protested the decision of the Tribunal in front of its building in Warsaw on Thursday night, as well as in several other Polish cities. The protesters in Warsaw marched to the headquarters of PiS and, later on, to the home of PiS leader Jaroslaw Kaczynski, in a demonstration that lasted well into the night. The police used tear gas several times to disperse the peaceful protesters. The organisers called for another protest on Friday at 7pm "at the same location", meaning Kaczynski's address, which is likely to be bigger than Thursday's despite the current pandemic restrictions.

Meanwhile, in Slovakia, a group of ultra-conservative MPs...