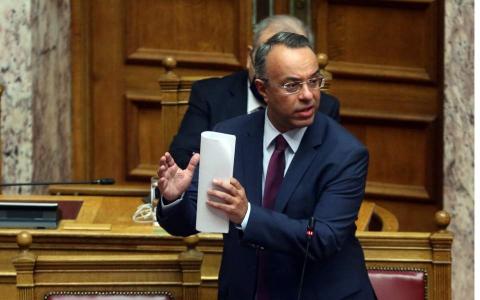 A parliament plenary on a motion of censure tabled by main opposition SYRIZA leader Alexis Tsipras and 85 MPs of the party against Finance Minister Christos Staikouras on Friday, continued on Saturday with speeches by cabinet ministers.

At the heart of the debate is the finance ministry's new bankruptcy code, with the government categorically rejecting the motion of censure and blaming SYRIZA for abolishing the protection of primary residences during its tenure in government.

On Saturday, main opposition lawmakers denied that there has never been an auction of a debtor's primary residences under the SYRIZA administration, and slammed the government's debt settlement law, which they say legalizes the seizure of Greeks' assets and leads workers, the self-employed, pensioners and households to bankruptcy.

All parties have already submitted a roster of speakers,...