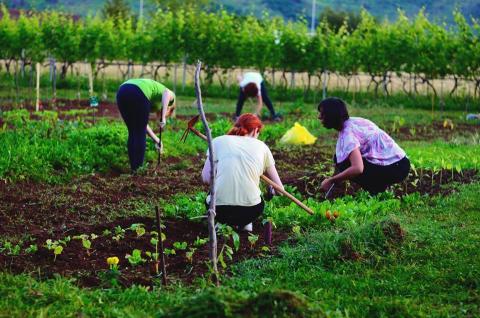 Whether it is because of job losses, or just a way to escape the dull reality of quarantine measures - or both - the outbreak of the coronavirus has resulted in many citizens starting to cultivate gardens, parks and any other available land.

"Social gardens in urban areas are potentially very important for our citizens, especially in these times of the further impoverishment of the population," Cazim Alkovic, the city administrator of Montenegro's main port of Bar, told BIRN.

"We have a large consumption of food in urban areas that someone has to produce. If the citizens of Bar recognize the economic crisis as an opportunity to produce at least herbs in their gardens or on the roofs of their buildings, the effects will be visible in the long run," he adds.

Since the start of the pandemic this spring, new urban farmers in Bar and other towns have either launched or joined existing civic initiatives that promote urban gardening and cultivating healthy organic food.

Some of these associations, such as the Plantadjun and Experimental Garden projects, already produced their first harvests at the end of this summer.

They gave away some of their produce as donations to charities and religious organizations that feed people in need, such as Women of Bar, the Catholic welfare agency, Caritas and Orthodox Church initiatives.

These projects have inspired new ideas, which some say may rectify the decades-long negligence of agriculture in the country.

The small and mainly mountainous country of only a little above 600,000 citizens has limited agricultural capacities.

According to Montenegro's Statistical Agency, Monstat, an agricultural survey from 2010 showed only 13.7 per cent of the country's territory was suitable...