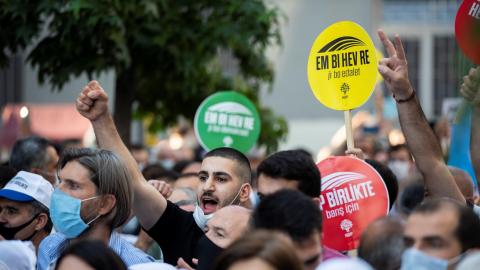 Protestors shout slogans against government as they hold placards reading on 'for democracy, all together' during their march against the arrest of pro-Kurdish People's Democtaric Party HDP parliamentarians DTK's co-chair Leyla Guven and Musa Farisogullari, Photo: EPA-EFE/TOLGA BOZOGLU

The DTK, which is headquartered in Diyarbakir, south-eastern Turkey, is an umbrella organisation that aims to bring together pro-Kurdish political parties, NGOs and others.

The names of the detainees appeared in some DTK documents that the police seized earlier. "Our colleagues were detained because their names are allegedly mentioned in DTK documents," Cihan Aydin, president of the Diyarbakir Bar Association, wrote on Twitter.

According to VOA in Turkish, 24 of the 72 detainees are lawyers. Another 25 people, including nine lawyers, are still being searched for by the Turkish police.

"Several lawyers and prominent civil rights defenders were detained this morning after their doors were broken by police. … You [the Turkish government] are killing justice and the law," Ebru Gunay, spokesperson of the pro-Kurdish People's Democratic Party, HDP, told a press conference, calling on the government to release the detainees.

The Diyarbakir Bar Association said in a written statement that the detentions were intended to silence the Bar Association and halt civil society work. "We urge the authorities to immediately release our colleagues and NGO representatives," the statement said.

The government has intensified its pressure on the pro-Kurdish HDP party and on other Kurdish groups in the last few years.