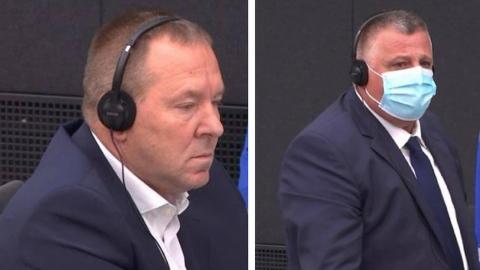 The lawyer for the Kosovo Liberation Army War Veterans' Organisation told BIRN that the Hague-based Specialist Prosecutor's Office has filed charges against the organisation's leaders, Hysni Gucati and Nasim Haradinaj.

"The indictment has only been filed but has not been confirmed [by a judge]," said lawyer Tome Gashi, without giving any details of the charges.

The Specialist Prosecutor's Office has not yet issued any statement about the men's indictment.

Gucati, the leader of KLA War Veteran's Organisation, and his deputy Haradinaj were arrested in late September for alleged obstruction of justice and witness intimidation after they received leaked documents from Hague war crimes cases against senior KLA members including ex-President Hashim Thaci.

The arrest warrant said Gucati was suspected of distributing or allowing media access to confidential leaked documents on three separate occasions in September.

Three batches of documents from cases at the Kosovo Specialist Chambers were allegedly anonymously delivered to the KLA War Veterans' Organisation, which urged Kosovo media to publish them, although without naming witnesses. No Kosovo media outlet has done so, however.

Gucati and Haradinaj were transferred to The Hague after their arrest and have been in custody ever since.

The Kosovo Specialist Chambers were set up to try crimes allegedly committed during and just after the Kosovo war from 1998 to 2000. They are part of Kosovo's judicial system but located in the Netherlands and staffed by internationals.

They were set up under pressure from Kosovo's Western allies, who feared that Kosovo's justice system was not robust enough to try KLA cases and protect witnesses from interference.