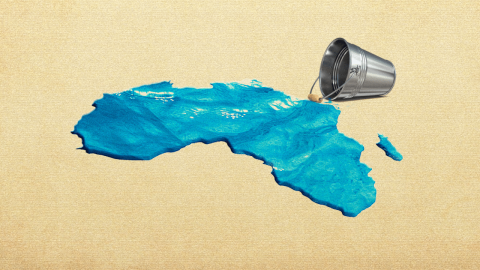 "I paid the money for the first kids' well, as well as the well which I and my sister had built for our parents earlier, through a giro transfer to Mr Aldin Kajmakovic. I have the payment slip. I forwarded the money for the second well through a friend of his," she explained.

According to posts on Kajmakovic's Facebook page, he has helped build around 2,300 wells in Africa in the period from October 2016 to March 2020. He claimed that the number of wells built was actually around 2,500, but BIRN Bosnia and Herzegovina determined that certain posts had been repeated.

According to prices published on his Facebook page and the number of pictures of wells, over the past three-and-a-half years, Kajmakovic has raised at least four million Bosnian marks (over two million euros) for the construction of wells.

But he told BIRN that he does not keep a particularly detailed record apart from the one on his Facebook page, because he and the group of people involved in the project - Haris Hecimovic, Adla Abazovic and Anel Okic, a doctor from Zenica, are "an informal group".

During a later conversation, Kajmakovic said that he had not published the photos of all the wells on Facebook because donors did not want them to be published, but that he kept an archive of them all.

The way that records are kept and money raised for the well-building project by Kajmakovic and his partners is different from methods used by other humanitarian organisations.

By analysing the posts with photos and data on the wells that have been built, BIRN Bosnia and Herzegovina determined that photographs of two wells have been altered to depict the same well with a changed signboard. This was confirmed by an international expert in digital forensics.