North Macedonia's parliament was set to start a plenary session on the law on the prosecution later on Monday in a shortened procedure aimed at trying to pass the law by Sunday, when parliament is due to dissolve ahead of early general elections on April 12.

Polling stations opened on Sunday in the presidential election run-off in North Macedonia, amid fears that if the turnout is as low as it was in the first round, two weeks ago, the election process is in danger.

A total of 3,480 polling stations opened at 7am for an election in which some 1.8 million people have the right to vote. 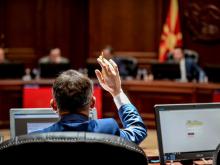 The coalition will be joined by two MPs of the Democratic Party of Albanians, DPA, and three MPs aligned with a faction of the BESA party led by Afrim Gashi, BIRN reported.

The ethnic Albanian Democratic Union for Integration, DUI, is already in the government. 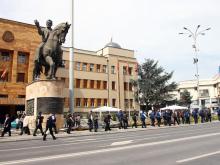 After Macedonia's parliament canceled Friday's session due to damage caused by rioters, heavily equipped riot police were deployed in front of the building in anticipation of more protests on Friday afternoon. 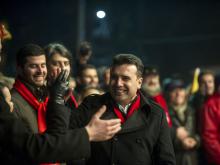 More than two months after the December election, the issue of Albanian language demands remains the main stumbling block between the opposition Social Democrats, SDSM, and the ethnic Albanian Democratic Union for Integration, DUI, in their talks on forming a new government. 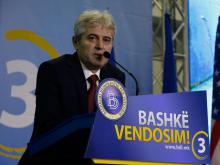 As the opposition Social Democrats continued to discuss forming a government with ethnic Albanian parties, a mysterious group called Hardcore, which describes itself as a Macedonian patriotic organization, called on ethnic Macedonians to join a protest march in Skopje on Friday. 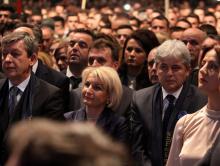 Macedonia's ethnic Albanian Democratic Union for Integration, DUI, said it was pulling its ministers from the provisional government and giving its head, Ali Ahmeti, authority to decide the next steps. 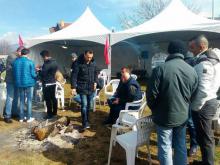 About 100 ethnic Albanians protested against the erection of a new tall cross in the Macedonian capital, spending Thursday night in tents set up at the site where the cross is to be built.

The protest was backed by the junior ruling party, the ethnic Albanian Democratic Union for Integration, DUI.

Lawmakers from the ruling parties on Monday gave the thumbs up on an interim Macedonian government, local media report.

The caretaker cabinet, which is to help the country prepare for early elections on April 24, was approved by lawmakers from the main ruling VMRO-DPMNE and its coalition partner in the previous government, the ethnic Albanian Democratic Union for Integration (DUI).