An association of Greeks in Russia led by Greek-Russian businessman Ivan Savvidis has sent cars and generators to pro-Russian separatist authorities in the eastern Ukrainian region of Donetsk, the Donetsk News Agency reported on April 10, saying that the donations would be used in providing medical aid and humanitarian assistance.

The "green" light for the operation of the waterway networks in Corfu and Paxos seaports was given by the Greek Ministry of Infrastructure and Transport, after the completion of the inspection procedures of the Corfu and Paxos Seaports by the competent committee.

Santorini and Mykonos seem to be the protagonists in the arrivals of tourists in the nine months of 2021, presenting the largest percentage increase of all Greek destinations.

Police in riot gear threw teargas and fired water cannon at Greek islanders as they tried to prevent access to construction sites for new migrant detention centers by setting fires, hurling flares and blockading the gates.

Locals on Lesvos and Chios are worried that the centers, which would replace temporary camps with open access, will leave the islands permanently overcrowded. 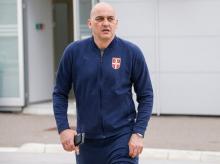 Former Serbia striker Darko Kovacevic was shot at on Tuesday evening outside his home in the Athens suburb of Glyfada, the Athens News Agency (ANA) reported, along with prototheme.gr web portal.
The gunman's burning car was found near the airport.
Kovacevic suffered a knee injury and was taken to a local hospital.

All private and state-owned media in Greece have launched a 24-hour strike today, joining the workers' general strike organized by the General Confederation of Employees in Greece.
The strike will last from Wednesday at six in the morning until about the same time on Thursday, Athens News Agency (ANA) reports.

Gunther Krichbaum, Chairman of the Committee on European Union Affairs of the Bundestag lauded the progress in the Greek economy and its prospect but also urge that Athens remain steady in its reform path.

During the decade long Greek economic crisis The Netherlands was among the strictest critics and most demanding partners of Athens.

At least seven people, including six tourists, were killed and more than 100 others injured when a violent, short-lived storm lashed northern Greece overnight, felling trees and ripping off rooftops.

Witnesses said the storm had come and gone in a matter of minutes. Winds of over 100 kph (60 mph) were reported on the Halkidiki peninsula, popular with tourists in the summer.

Greece today awarded licenses to ExxonMobil and Total to search for hydrocarbons off the island of Crete, marking the country's first major foray into an oil and gas search in the region.

The two companies, in a consortium with Hellenic Petroleum, have an eight-year research and exploitation license in two offshore blocks lying south and south-west of Crete.