A South Korean activist said Wednesday he had launched thousands of copies of Hollywood film "The Interview" into North Korea by balloon, ignoring dire threats of reprisals from Pyongyang.

The capital has labelled the Seth Rogen comedy about a fictional CIA plot to assassinate North Korean leader Kim Jong-Un, a "wanton act of terror". 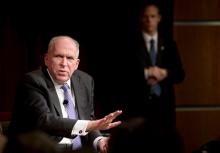 CIA director John Brennan gave a staunch defense of the framework nuclear deal with Iran on April 7, calling some criticism of the accord "disingenuous" while expressing surprise at Tehran's concessions.

Retired Gen. Bilgin Balanl?, who was among the 236 suspects acquitted in the "Balyoz" (Sledgehammer) coup-plot case, has said the United States or the Central Intelligence Agency (CIA) could have had a finger in the coup case.

Spy agencies are caught in a "technology arms race" with terrorists and criminals, the new head of Britain's MI6 said on March 31 in his first public comments since becoming chief.

Having the leader of Iran?s elite Quds Force direct Iraqi forces battling the Islamic State of Iraq and the Levant (ISIL) is complicating the U.S. mission against terrorism and contributing to destabilization in Iraq, the director of the Central Intelligence Agency said March 22.

The fighting in Syria, which started with an uprising against the Bashar al-Assad regime and transformed into a deadly civil war, has entered its fifth year. As of January 2015, it has claimed over 220,000 lives, displaced 7.6 million people inside Syria, and driven another 3.5 million people out of the country. 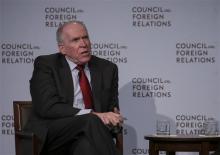 CIA Director John Brennan said on March 13 the United States does not want to see a chaotic collapse of the Syrian regime as it could open the way to Islamist extremists taking power.

According to data published in the CIA World Factbook, Bulgarian population has dropped below 7 million people.

The data was refering to the middle of 2014, and showed that Bulgarian population in fact amounts to 6,724,716 people. According to the CIA website, the information has been gathered based on population census, migration processes, life expectancy and others.

Corruption prosecutor Dimitris Foukas on Monday issued a warrant for the arrest of a former US Embassy official on spying charges.