Detainees held by the Syrian government are dying on a massive scale amounting to a state policy of "extermination" of the civilian population, a crime against humanity, United Nations investigators said on Feb. 8. 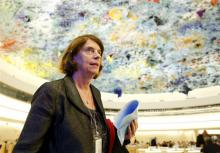 Israel's representative was conspicuously missing when the UN Human Rights Council started a special session March 23 on the situation in Palestine and the 2014 Gaza conflict.