Croatian Prime Minister Andrej Plenkovic has criticized Saturday's arrest of Construction Minister Darko Horvat in a corruption probe as disproportionate, and has called on the State Attorney's Office, DORH, to explain the reason and timing.

The prize-winning author of the design for the one-euro coin in Croatia withdrew his design on Monday, after claims that he had copied a published photograph.

Stjepan Pranjkovic said he was withdrawing the design due to "negative atmosphere in the media, as well as the pressure" he was under.

Media reported on Tuesday that the mayor of the Borovo municipality in eastern Croatia, Zoran Bacanovic, is under police investigation over his recent Facebook post about Operation Storm.

That is a problem for a far bigger set of actors in Bosnia than the reactionary and secessionist Alliance of Independent Social Democrats, SNSD, of Milorad Dodik, the Serb member of the state presidency.

The Peljesac Bridge, linking Croatia's Peljesac peninsula with the rest of the country, was fully joined together on Wednesday night, with the installation of the last, 165th segment of its steel span.

A law that will grant benefits to civilian victims of the 1991-95 war was adopted by Croatian MPs on Thursday with 107 votes in favour, 16 against and five abstentions.

It was passed after heated discussions in parliament about whether the law would also give benefits to people who were part of 'enemy' Serb forces during the war.

Rather than being a work-horse for the people of Zagreb, Bandic is "a Trojan horse working against the citizens," Tomasevic told some 4,000 protesters at the site. 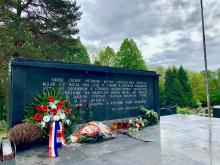 Croatia's Serbian National Council, SNV and the NGO Documenta - Centre for Dealing with the Past on Thursday commemorated the deaths of around 400 Serbs who were killed by Nazi-allied Ustasa members under the World War II-era Independent State of Croatia in the town of Glina 80 years ago.

Denis Becirovic, the other lawmaker behind the proposal, said that because deputies from the main Bosnian Serb and Croat parties, the Alliance of Independent Social Democrats, SNSD, and the Croatian Democratic Union, HDZ, did not back the changes, it is now time for Inzko to step in and impose a solution.