The Constitutional Court of Kosovo on Thursday ruled that President Hashim Thaci did not make an unconstitutional decision when he gave a mandate to a new prime minister to form a new administration without holding fresh elections.

He took this action after the outgoing ruling party, Vetevendosje, did not nominate anyone for the role.

As the results of Central Election Commission showed, the once dominant Democratic Party of Kosovo, PDK, came third, winning just over 21 per cent of the votes. The Alliance for the Future of Kosovo, AAK, won over 11 per cent.

Kosovo's incumbent Prime Minister, Albin Kurti, on Tuesday night condemned a death threat he said he had received from a phantom organisation called the "Albanian Volunteers' Guard", as the country edges close to the Constitutional Court ruling on his request to annul President Hashim Thaci's decree mandating Avdullah Hoti to form a new government. 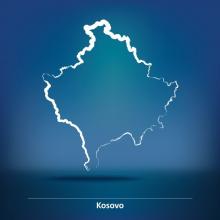 "Neither Grenell, nor Borrell, or Lajcak can change borders or exchange territories," President of the Democratic League of Kosovo, Isa Mustafa, said in a post on Facebook.
The LDK President says Pristina must trust its allies, believe in the US and EU, as well as in itself.

Pressing on with his plans to form a new government without holding fresh elections, Kosovo President Hashim Thaci on Thursday asked the former junior governing party, the Democratic League of Kosovo, LDK, Isa Mustafa, to name a potential mandator to form a new administration.

After the heads of the Democratic League of Kosovo, LDK, Isa Mustafa, and the Alliance for the Future of Kosovo, AAK, former prime minister Ramush Haradinaj, on Wednesday agreed to work on creating a new coalition government, President Thaci said he would give a mandate to form a government to whatever coalition was able to assemble a majority.

"Next week I'll take the final constitutional steps to enable the formation of a new government with full legitimacy from parliament, capable of fighting COVID-19 and serving the people," the President tweeted.

Isa Mustafa, leader of the former junior partner in government, the Democratic League of Kosovo, LDK, on Tuesday said his party was ready to form a new governing coalition with smaller parties - but will not discuss potential candidates for the post of prime minister before officially receiving a mandate from the President.