BELGRADE - The W. Balkan nations' EU membership is a question of timing and hard work by the candidate countries, says Maciej Popowski of the EC Directorate-General for Neighbourhood and Enlargement Negotiations.

The EU enlargement strategy for the W. Balkans is "ambitious but realistic", he told reporters. 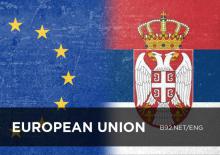 The Serbian government and the European Commission on Wednesday signed a financial agreement approving EUR 84.8 million from IPA 2014 funds to Serbia.

The agreement was signed by Serbian Minister of European Integration Jadranka Joksimovic, who is also the national IPA coordinator, and Catherine Wendt of the EC Directorate-General for Neighborhood and Enlargement Negotiations.

BELGRADE – A presentation of technological innovation by finalists of the Best Technology Innovation 2013 competition has been organized in Brussels by the Serbian Chamber of Commerce (PKS) for representatives of the business and academic communities and institutions of the EU.