The going is getting tougher for Greek clubs in Europe as the group stage draws for the Champions League and the Europa League have offered them serious challenges for the months to come.

Ludogorets will play against Bayer (Leverkusen), Zurich and AEK (Larnaca) in the Europa League groups, taking the draw on Friday. 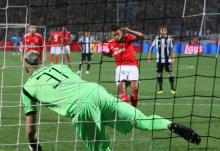 PAOK Thessaloniki failed to reach the UEFA Champions League group stage after suffering a 4-1 defeat at their home ground against Portugal's Benfica on Wednesday night.

The teams were tied 1-1 after the first leg in Lisbon and Serbian striker Aleksandar Prijovic put the Greek cup winners ahead on the night.

The 29-year-old became a key figure after joining Dinamo in 2016 from Belgian side St Truiden, having also played for Helsingborg and IFK Gothenburg in Sweden and Turkey's Konyaspor.

Beşiktaş advanced to the Europa League group stage playoffs after eliminating LASK Linz of Austria on away goals.

Neither Asteras Tripolis nor Atromitos did manage to advance in the Europa League, failing to score victories at home in the return games held in Greece on Thursday.

Both the Asteras vs Hibernian and the Atromitos vs Dinamo Brest games finished 1-1 for the second qualifying round, leaving Olympiakos as the only Greek club left in the competition.

They burst into the gas station at around 03:00 hours CET, robbed it, and demolished the shelves.

The Interior Ministry (MUP) said that the thieves took "a large quantity of beverages" from the gas station's store, "and left without paying." 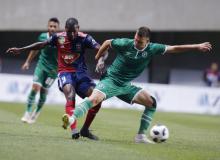 Ludogorets ended their participation in the Champions League tournament in the second qualifying round, although the club's ambitions were to enter the group stage. The Bulgarian Champion in the last 7 seasons lost 0:1 on their visit to the Hungarian "MOL VIDI" (formerly "Videoton") in Hungary and dropped out after the first game ended 0-0.

Asteras Tripolis and Atromitos went down on the road in contrasting ways on Thursday for the second qualifying round of the Europa League, but will both go through at home in the second leg with a one-goal win next Thursday.

Asteras lost 3-2 to Hibernian in Edinburgh, despite leading 2-0 after the first half.

New-look Arsenal left out controversy-hit Mesut Özil but still impressed before they were edged 3-1 on penalties by Europa League champions Atletico Madrid in a friendly on Thursday.