The Finance Ministry is now considering extending the loans to companies known as the "Deposit To Be Returned" until June, taking into account market needs.

Finance Minister Florin Citu says it is difficult to talk now about short-time working in the public sector, because the measure is difficult to interpret, cannot be applied uniformly and the entire administrative apparatus is needed in the fight against the coronavirus crisis.

The Finance Ministry is about to complete the drafting of the new bankruptcy code that will allow for the speedy bankruptcy of households as well as businesses. The bill will allow them to be relieved of their debts, offering them a second chance once their entire set of assets has been liquidated.

The government has another package of business support measures ready for May, top officials at the Finance Ministry assure, as the coronavirus pandemic continues to keep the economy locked down, which will inevitably lead to the use of cash reserves.

The online platform on Taxisnet for the submission of declarations of 2019 incomes will open next week.
Finance Ministry sources say the system will be open for anyone who wants to submit their statements, but no one knows when it will close.

The Finance Ministry decided on Thursday to extend the deadline for applications for state support to enterprises, known as the "Deposit To Be Returned," until April 21, as numerous small businesses have not managed to collect the necessary documents. The original deadline was on Friday.

The government is considering a 25 percent discount on this year's Single Property Tax (ENFIA) dues for owners who will suffer a loss in income following the state's decision to reduce the rents paid by corporations and households suffering directly as a result of the coronavirus restrictions by 40 percent. 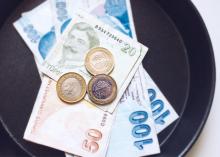 In March, the Treasury's cash revenues amounted to nearly 53.9 billion Turkish liras ($8.15 billion), showing a 21% decline on a yearly basis.

The Finance Ministry is considering extending the deadline for application submissions by companies wishing to receive a part of the state support totaling 1 billion euros, as well as to expand the program by another 1 billion euros.

The Treasury bills will be settled on Wednesday and mature on June 9, 2021.