At the foot of Mount Olympus, army aviation forces from Greece and the United States are taking part in a live-fire exercise with attack helicopters, marking deepening defense ties between the two countries.

As a delegation of Turkish military officials arrived in Athens to resume confidence-building measures, Turkish fighter jets on Monday conducted a total of 34 violations of Greece's airspace.
Four pairs of Turkish F-16 and a CN-235 maritime patrol aircraft entered the Athens Flight Information region (FIR) without having previously submitted a flight plan.

Main opposition SYRIZA slammed the government over its management of relations with Turkey and demanded that it respond to Turkish President Recep Tayyip Erdogan's statement that he hopes that Greece does not approach Aegean islands the sovereignty of which Ankara disputes, just as the Greek military this year did not approach the Imia islets on the anniversary of the crisis that brought the tw 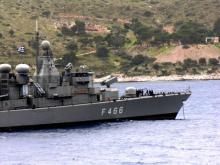 The revelation that anti-tank missiles, an as yet undetermined number of rockets, and dozens of grenades and projectiles from the Greek Navy base on the Greek island of Lesvos have been stolen has rocked the Greek military.

Similar events occurred when Greek terrorist groups were established and when they reformed in order to bolster their power.

The leadership of Greece's armed forces is reportedly examining all possible scenarios given the possible challenge by Turkey of Greece's sovereignty in the wider region of Kastellorizo in the southeastern Aegean.
For this purpose, all branches of the Greek military have been been taking all necessary precautions, reports said at the weekend.

Defense Minister Evangelos Apostolakis will travel to Crete to assess the damage after the Aegean island was hit by torrential rain and gales causing extensive damage to roads, buildings and infrastructure, the government said Tuesday.

A Turkish Air Force F-16 descended to 3,200 feet while passing over the southeastern Aegean island of Farmakonisi on Tuesday after entering the Athens Flight Information Region at 10.55 a.m.

On Monday, seven Turkish aircraft, four of which were armed, violated the Athens FIR on four separate occasions, the Greek military said, adding that they were chased off by Greek fighter jets.

US-based internet media company BuzzFeed has published a series of photographs and videos shot by residents inside the government-run Moria refugee and migrant processing center on the eastern Aegean island of Lesvos.

The following article is a summary of the events of the Genocide of the Greeks of Pontos, the memory of which the Greeks around the world honor today:

According to a report by the Greek Military website Defencenews.gr, the Republic of Cyprus is interested in selling its 11 Mil-35PMs due to their relatively low operational availability.