Istanbul University and the Avcılar Municipality have initiated a monitoring project in a bid to clean Istanbul's Lake Küçükçekmece and restore its lost biodiversity.

Within the scope of the project, where the works will continue until June, it is planned to enable the lake and its biodiversity to gain its former health by applying an effective and sustainable restoration technique.

Türkiye's first zoology museum will be reopened seven years later after being relocated due to earthquake risk.

In 2105, a demolition decision was taken for the museum, which was opened in Istanbul's Beyazıt districts in 1933.

Within the scope of the decision, the museum's collections were taken under protection in the warehouses of Istanbul University for seven years.

Experts are foreseeing plenty of bonito in the new fishing season that has kicked off in Türkiye after a five-month hiatus, with the number of anchovies declining as the number of fisheries has decreased around 30 percent in the last decade.

Turkish experts have warned the municipalities and the residents of the country's western coastal provinces to take strict measures against the danger of the West Nile virus that has caused 11 deaths in Greece in a week.

According to the experts, aerial spraying against the mosquitos should start immediately and continue through September in the Aegean and the Tracian regions.

Following the end of a five-month ban, the fishing season has kicked off in Türkiye, with experts foreseeing plenty of bonito in the Black Sea.

After completing her oceanography education in France, a Turkish scientist has returned to the country to conduct research on coral species in the depths of the Marmara Sea that have never been studied before. 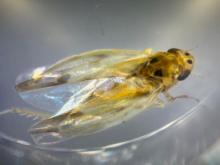 Leafhopper, a type of cicada originated in France, has spread around Anatolia, sickening plants with a pathogen called "phytoplasma," a research carried out by four experts from Istanbul University has revealed.

If global warming continues at this rate, all glaciers on Türkiye's mountains will definitely melt, says Yıldırım Güngör, an associate professor from Istanbul University.