PRISTINA - The continued presence of illegal re-occupation of properties gives a cause for concern and calls for a determined response by Kosovo institutions that should guarantee the full protection of the property rights of all communities in Kosovo, reads an OSCE Mission report launched on Thursday.

BELGRADE - The Special Department for Organised Crime of the High Court in Belgrade acquitted businessman Zvonko Veselinovic from Zvecan, northern Kosovo, of charges that he illegally claimed 32 trucks owned by Hypo Alpe Adria Leasing together with his associates.

Bojic specified that the main police directorate based in Pristina decided to scrap the police escort service for Rakic on February 2. 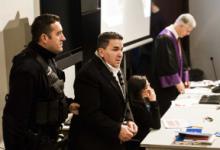 Regional co-operation in combating organised crime, especially drug trafficking, is a matter of legal assistance between the states.

Suspected drug lord Naser Kelmendi (right) arrives at the court in Pristina for his trial on January 16th. [AFP]

Another protest in Pristina turns violent

PRISTINA -- The Kosovo police used tear gas and a water cannon on Tuesday in Pristina in an attempt to push back about 1,000 demonstrators who threw rocks at them.

BELGRADE - Deputy Chief Prosecutor at Kosovo's Special Prosecution Office Jonathan Ratel has pledged that EULEX will reopen all cases of kidnapped and murdered journalists in Kosovo-Metohija, the Journalists' Association of Serbia (UNS) has said in a release. 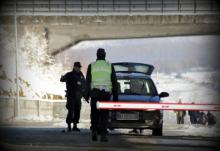 Experts suggest Kosovo and Serbia co-operate more closely as the talks between the two countries are renewed. 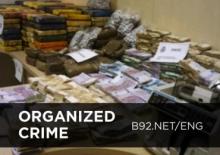 PRISTINA -- The Special Prosecution in Kosovo has indicted five person on organized crime charges, among them three officials of the Interior Ministry in Pristina.

The EU mission in Kosovo, EULEX, said in a statement that the group is suspected of illegal arms trade, fraud, and abuse of official position and powers.

KOSOVSKA MITROVICA - Dimitrije Janicijevic, 35, a member of the North Mitrovica municipal assembly, was murdered a year ago to this day, but his killer is still at large.

Janicijevic was killed by gunshots outside his family home in Kosovska Mitrovica.

GRACANICA, - MP in the Kosovo parliament and candidate for Gracanica mayor Nenad Rasic condemned the graffiti of the Kosovo Liberation Army (KLA) written on the walls of the Orthodox church in Lipljan, and qualified the incident as an act of vandalism and a crime.