NASA's Christina Koch returned to Earth safely Feb. 6 having shattered the spaceflight record for female astronauts after almost a year aboard the International Space Station.

Koch touched down at 0912 GMT on the Kazakh steppe after 328 days in space along with Luca Parmitano of the European Space Agency and Alexander Skvortsov of the Russian space agency.

A potentially dangerous asteroid with a diameter of 440 to 990 meters is approaching Earth, according to NASA's website.

According to the US National Aeronautics and Space Administration (NASA), a celestial body with the number 163373 will approach the Earth at a minimum distance of February 15.

Here's a list of every lunar eclipse coming up over the next 10 years according to NASA.   June 5, 2020 (penumbral)

Elon Musk's SpaceX simulated a successful emergency landing on Jan. 19 in a dramatic test of a crucial abort system on an unmanned astronaut capsule, a big step its mission to fly NASA astronauts for the first time as soon as this spring.

2019 is the second warmest year ever recorded, the Copernicus Climate Change Service (C3S) has announced, quoted by France Press. This was also the warmest decade.

2019 was only 0.04 degrees Celsius colder from 2016, the warmest year ever since the El Nino phenomenon. According to NASA data, in 2016 El Nino's extreme intensity has increased global temperatures by 0.2 degrees Celsius.

NASA has announced that its exoplanet-seeking satellite TESS has discovered a new planet the size of Earth that is within a habitable distance of its star and where there may be liquid water, BTA reported.

People around the world are uniting in a prayer for rain in Australia to help put out fires. So far, the fires have killed 19 people and 39 others were injured, TASS reported. Shocking videos of fires are shared on social networks.

NASA's Mars 2020 rover will head off for the Red Planet next year. But like Voyager, Galileo and Cassini before it, the mission's epic journey began in a "clean room" in California. 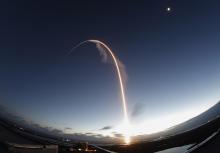 Boeing's new Starliner capsule ended up in the wrong orbit after lifting off on its first test flight on Dec. 20, a blow to the company's effort to launch astronauts for NASA next year.

From finding the building blocks for life on Mars to breakthroughs in gene editing and the rise of artificial intelligence, here are six major scientific discoveries that shaped the 2010s and what leading experts say could come next.