Pope Francis was welcomed at the Cotroceni Presidential Palace on Friday with full military honours by Romania's President Klaus Iohannis at a ceremony held on the Marinescu Plateau. Iohannis alongside his wife, Carmen, welcomed Pope Francis. The welcoming delegation comprised all presidential and state advisers.

In an interview with Kathimerini, Elpidophoros, the new archbishop of America, says he is determined to tidy up the archdiocese's finances and make sure there is full transparency in the administration of donors' contributions.

US Ambassador in Athens Geoffrey Pyatt met Ecumenical Patriarch Vartholomaios on Friday, ahead of the latter's visit to Washington this fall, stressing he felt honored to see the head of the Orthodox church.

Prosecutor Marijana Cobovic told the Bosnian state court at the start of the trial on Wednesday that the 14 defendants were responsible for the murders, detentions, rape, torture and mistreatment of the Serb population in Konjic, as well as burning their property and the local Orthodox church.

Greek Orthodox Archbishop Demetrios of America assumed his position as a result of a revolt in the body of the Church and he is now stepping down largely as the result of a major financial scandal that has rocked the nearly bankrupted the Archdiocese and scandalised the flock. 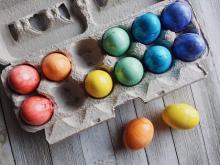 Orthodox Christians in Bulgaria and around the world mark on April 22 Holy Monday - the first day of the most important week in the church calendar, the Holy Week leading to Easter.

AGERPRES special correspondent Catalina Matei reports: Developing co-operation between the Romanian and Israeli nations was the main topic of discussion held in Jerusalem on Tuesday as part of a visit by the Minister for Romanians Abroad, Natalia Intotero, along with an official retinue, at the Jerusalem City Hall.

Cyprus' Orthodox Church says it supports the Ukrainian Orthodox Church's right to independence that was granted by the Ecumenical Patriarch of Constantinople last month, aiming to heal its divisions.
The Holy Synod also said Wednesday, however, that Patriarch Bartholomew should take into account the "sensitivities" of Russians whose roots in the faith are found in Ukraine.