A Bosnian-born woman who came to Austria as a child refugee will be Austria's new Justice Minister, it was confirmed on Thursday.

Thirty-five-year-old Alma Zadic, a lawyer and member of the Green Party, will also be the youngest Justice Minister in Austrian history and the first to come from an immigrant background. 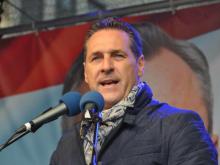 The international community should stop using force to keep Bosnia and Herzegovina artificially alive and allows its peoples self-determination, Heinz-Christina Strache, a leader of the far-right Freedom Party of Austria, FPO, said in an interview.