Turkish Parliament Speaker Mustafa Şentop has informed that the parliament has received summary proceedings against 33 lawmakers, including those from the ranks of the Peoples' Democratic Party (HDP).

"A total of 33 summary proceedings were sent to the parliament last night. They include the members of the HDP as well," he told the reporters on Feb. 24.

Some 1,811 people have been sentenced to prison for violence against healthcare workers in the past five years in Turkey, Health Minister Fahrettin Koca has said in response to a parliamentary question filed by a deputy of the main opposition Republican People's Party (CHP).

The struggle against terror is not merely killing terror group members, but also other means of fighting should be carried out in this process, the main opposition party leader has said, questioning the government's way of fighting against the illegal PKK group.

Main opposition Republican People's Party (CHP) leader Kemal Kılıçdaroğlu on Feb. 22 stressed that his party attaches importance to patriotism while objecting to the government members' accusations against his party over the killing of 13 Turks in Iraq by the illegal PKK members. 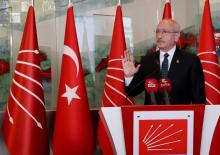 Kemal Kılıçdaroğlu, the chairman of the Republican People's Party (CHP), has rebuffed the criticisms from senior government officials and repeated his questions over the last week's military operation that ended with the killing of 13 Turkish nationals by the PKK. 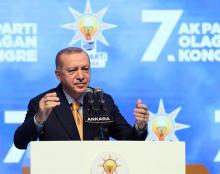 Main opposition Republican People's Party (CHP) leader Kemal Kılıçdaroğlu on Feb. 16 criticized the government for not taking the "necessary steps" to rescue 13 Turkish nationals that were killed by the illegal PKK group. The CHP leader has posed five questions to President Recep Tayyip Erdoğan and held him responsible over the incident.

Defense Minister Hulusi Akar and Interior Minister Süleyman Soylu on Feb. 16 separately paid visits to the Republican People's Party (CHP) and İYİ (Good) Party to inform them about the illegal PKK group's killing of 13 Turks in the Gara region of northern Iraq and Operation Claw-Eagle 2.

The ministers then briefed members of parliament on the details of the operation.

Kemal Kılıçdaroğlu, the chairman of the main opposition Republican People's Party (CHP), has called on the EU to revive Turkey's long-stalled full membership process while expressing his regret to observe that Turkey was only mentioned in the context of the foreign policy matters in Brussels.