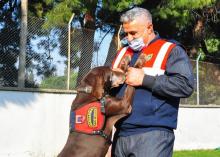 A sniffer dog named Volta has retired after serving for ten years in the gendarmerie forces in the western province of Manisa.

The Pointer breed dog's carrier in the gendarmerie forces began in 2011.

Volta assisted the local anti-smuggling and organized crime squad in the province of Manisa in 2016.

Turkey rescued at least 109 asylum seekers aboard a faulty boat set to sail from a bay in Turkey's Aegean Izmir province.

Local gendarmerie teams learned that migrant smugglers were preparing to take asylum seekers to Italy by boat attached to a fishing port in the Karaburun district of Izmir. 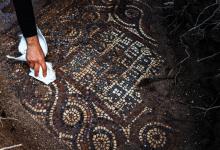 A monastery, built during the Roman period, and a 1,500-year-old mosaic have been unearthed during an illegal excavation carried out in the western province of İzmir's Aliağa district.

An unexploded artillery shell, presumably left from the Turkish War of Independence, was found in the backyard of a house in the Aegean province of Afyonkarahisar. 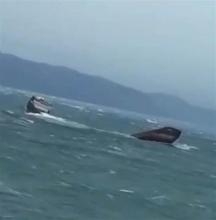 A Palau-flagged dry cargo ship sank off the coast of Turkey's Black Sea province of Bartın on Jan. 17, according to an official.

Rescue workers managed to save six crew members and reached the body of one other on the Arvin, which sank off the coast of Bartın province, said Bartın Governor Sinan Güner.

The terrorists were attempting to carry out an attack in the Operation Peace Spring area, the ministry said on Twitter.

Turkish authorities use the word "neutralized" to imply the terrorists in question surrendered or were killed or captured.

At least two YPG/PKK terrorists have been neutralized in Turkish airstrikes in northern Iraq, the Defense Ministry on May 17.

The terrorists were neutralized in Avasin-Basyan region after being detected by reconnaissance and surveillance vehicles, the ministry said on Twitter.

Two detained relatives of Abu Bakr al-Baghdadi, the killed leader of ISIL, were remanded by a court in central Turkey on Dec. 19, judicial sources said.