Mexico’s President Enrique Peña Nieto beat President Trump to the punch Thursday — telling the White House that he has canceled his trip to Washington because of Trump’s insistence on building a border wall.

Mike Pompeo was sworn in on the night of Jan. 23 as director of the CIA at a crucial time for U.S. national security as intelligence - traditionally a nonpartisan issue - has been thrust into the political arena.

In a city bound by tradition, every president taps a legislative affairs director to work with Congress. U.S. President-elect Donald Trump appears ready to use a legislative whip like none other: Twitter.

President-elect Donald Trump praised President Vladimir Putin for refraining from tit-for-tat expulsions of Americans in response to US punitive measures over alleged Russian interference in the November election.

Putin's decision came despite the foreign ministry asking him to send home 35 US diplomats after President Barack Obama had expelled the same number of Russian staff.

Donald Trump embraced new Cabinet officers on Dec. 7 whose backgrounds suggest he's primed to put tough actions behind his campaign rhetoric on immigration and the environment, even as he seemed to soften his yearlong stance on immigrants brought to the U.S. illegally as children.

Late on Sunday night, the former head of state Nicolas Sarkozy annouced his retirment from politics.

His decision was preceded by his loss in the first round of the primary presidential elections which had to determine the two candidates of the Republican Party who will countinue the race to win a place at the Élysée Palace. 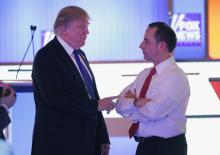 On Sunday, president-elect Donald Trump appointed Reince Priebus, the chairman of the Republican National Committee and a loyal campaign adviser, his White House Chief of Staff.

Greek-American Washington insider Priebus was chosen from a shortlist of names that also included Steve Bannon, the right-wing media boss who took over Trump’s presidential campaign in its final weeks.

The Russian diplomat said on BNR that Russia, and the Soviet Union before that, have always worked better with US presidents from the Republican Party.

Finally the U.S. elections have got a winner. But the process is not over yet. They have given way to a world-wide discussion: What does Trump's victory mean after all?

It means the collapse of everything called "mainstream": Mainstream media and mainstream politics.

Last Tuesday night, I went to bed thinking that I would probably wake up to a world with Hillary Clinton as the next American president. I woke up instead, of course, to Donald Trump as the next American president. It was a big surprise, of course, if not a shock. But I told myself, as I later told others, "Don't panic, it probably won't be that bad."