The Russian Ministry said that "the unity and solidarity of the Orthodox world, as well as the preservation of its centuries-old foundations, are crucial for ensuring the normal development of society."

The new Russian director of the Russian-Serbian Humanitarian Center says he has no intention of persuading anyone that the facility is not a military base.

The arrival of Viktor Gulyevich, "a Baikal commander," to Nis, a town in southern Serbia, has stirred spirits when it comes to the Center (RSHC), Sputnik said.

Russian Prime Minister Dmitry Medvedev said that the American attack on an air base in Syria led the US "one step" from conflict with the Russian army.

Medvedev wrote on the social network that US attacks are "illegal" and that they have brought it "on the brink of military conflict with Russia". 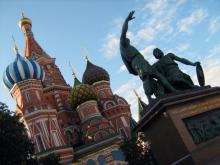 Russia has called on Croatia to refrain from offering Ukraine its "peaceful reintegration experiences," and instead "tackle its own deep-rooted problems."

These problems, a Russian Ministry of Foreign Affairs statement said on Tuesday, concern the rights of Serbs and other ethnic minorities in Croatia.

Russia's Foreign Ministry denied having role in opposition protests in Podgorica as Montenegrin Prime Minister Milo Djukanovic again pointed the finger at Moscow as the alleged organizer of anti-goverment demonstrations.

MOSCOW, May 30 (Tanjug) - Russia has sent another 33 tons of relief aid to Serbia, the spokesperson of the Russian Ministry of Emergency Situations Alexander Drobyshevsky said on Friday.

A Russian Ilyushin-76 plane carrying 33 tons of aid for flood-hit regions in Serbia took off for Belgrade early Friday, he said.