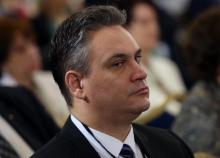 The prosecutors' college in the Supreme Judicial Council on August 5 reinstated the former head of the of the Counter-Corruption and Unlawfully Acquired Assets Forfeiture Commission (CCUAAFC) Plamen Georgiev to the post of prosecutor. The reinstatement was supported by all participants in the extraordinary meeting, which lasted 3 minutes, reports BNT.

Mayor of the North Region of Plovdiv, Ralio Ralev, has been detained for investigation of corruption offenses as well as suspicions of misappropriation of public procurement. That's what NOVA learned from sources close to the investigation. There are other arrests on unconfirmed information.

The wife of Vetko Arabadzhiev - Marinella, will be extradited to Bulgaria on May 30th, NOVA writes.

She is currently in Spain.

The Specialized Prosecutor's Office, the Directorate for Combating Organized Crime and the ODIHR-Vidin, with the support of the Gendarmerie Directorate at the Ministry of Interior, are investigating an organized crime group for human trafficking for begging (mainly in the Kingdom of Sweden) and money laundering.

A record number of weapons and ammunition were found in a garage in the Reduta district, NOVA reported. They were found in a GDBOP action and the Specialized Prosecutor's Office. Some of the machine guns were found in the village of Gabarevo, Municipality of Pavel Banya. Drugs were also found in the operation. One person has been arrested on the case, detained on November 30, Darik learned.

Dimitar Zhelyazkov - "The Eyes" was arrested last night in Istanbul. The Turkish authorities have notified the Bulgarian Ministry of Interior and followed a procedure for extradition. This was announced by the spokesperson of the Chief Prosecutor Rumyana Arnaudova.

An organized crime group for racketeering and drug trafficking was detained in a special operation in the Burgas region, the prosecution announced. The action was organized and conducted jointly by the Specialized Prosecutor's Office and the DGCOC.

A group distributing drugs on the territory of Pleven and Lovech was busted and six people were arrested in a special operation of the Interior Ministry and the Chief Directorate for Combating Organized Crime, conducted under the direction of the Specialized Prosecutor's Office, the Ministry of Interior announced on Wednesday.

Today the prosecutor's office will give details of the detention of the mayor of the Sofia district Mladost, Desislava Ivancheva and her deputy Biliana Petrova.