Turkey's foreign trade volume grew 3.6 percent year-on-year to $98.4 billion in the first quarter of 2020, according to a preliminary Trade Ministry data released on April 2.

The country's exports volume was choked off by coronavirus in January-March after seeing 4 percent rise in the first two months, the ministry said in a statement.

Turkey has launched a legal challenge at the World Trade Organization (WTO) against EU tariffs on steel imports, the country's Trade Ministry said on March 20.

The EU launched an investigation and imposed curbs on steel imports in July 2018 in response to import duties applied by the United States.

Turkish customs officials seized a record two tons of marijuana at the border crossing with Bulgaria, the country's trade minister said on Feb. 11.

"In an operation carried out at the Kapıkule [customs gate] by customs officials of our ministry, 2.07 tons marijuana were seized, and a new record has been broken," Ruhsar Pekcan said in a tweet.

Turkey's Trade Ministry on Feb. 1 announced it was seeking new trade channels with the U.K. during the Brexit transition period.

Turkey will stabilize the inflation rate at single digits by improving competition in goods and services markets and enhancing production, the country's treasury and finance minister said Jan. 3.

"Fight against inflation will be our top agenda in 2020," Berat Albayrak said on Twitter, underlining the year-end inflation rate was below the government's target.

Ruhsar Pekcan said that despite all the hurdles in 2019, Turkey once again broke records in exports hitting a historical high.

The total worth of projects undertaken by Turkish contractor firms abroad reached $395 billion as of the end of November, Turkey's trade minister has said.

The figure is expected to reach $400 billion as of the end of this year, Ruhsar Pekcan noted late on Dec. 25 during an award ceremony in the capital Ankara for Turkish contractors operating in foreign countries. 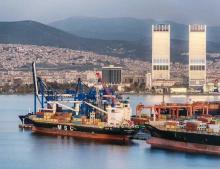 Under Turkey's state subsidies for exports, the top item in the Trade Ministry budget, some 3.7 billion Turkish liras ($642.7 million) will be provided to help exporters this year, said the trade minister on Nov. 8.

Customs enforcement team in Turkey have seized 13.29 kilograms (29.29 pounds) of cocaine in an operation in Istanbul airport, the Trade Ministry said on Sept. 21.