An opposition lawmaker, whose seat in parliament was revoked due to his final prison sentence, was detained in the Turkish capital Ankara on April 2.

Ömer Faruk Gergerlioğlu of the Peoples' Democratic Party (HDP) was detained from his residence by the Turkish police.

The action came in light of a court ruling on Ömer Faruk Gergerlioğlu, which was read out in parliament.

Turkey's parliament speaker on March 13 hit back at baseless, ignorant claims the European Parliament made about Turkey.

"We reject the uninformed, unfounded, and malicious allegations against our country" adopted by the European Parliament's General Assembly on the 10th anniversary of the Syrian conflict, Mustafa Şentop said on Twitter.

Turkey on March 11 marked the centennial anniversary of the Istiklal Marsi, or March of Independence, Turkey's national anthem.

An event to mark the anniversary and to commemorate Mehmet Akif Ersoy, the writer of the anthem's lyrics, was held at the Beştepe National Congress and Culture Center in the capital, Ankara.

Turkey's parliament can expect to get new reform proposals shortly, the nation's president said on Jan. 27.

"Soon we will begin to submit new reform packages, which we are about to complete, for parliament's consideration," Recep Tayyip Erdoğan told his ruling AKP's parliamentary group. 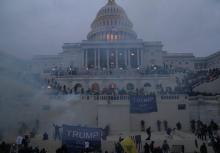 Reacting to scenes of supporters of U.S. President Donald Trump on Wednesday storming the Capitol building, Turkey urged all parties in the U.S. to use moderation and common sense.

Turkey's parliament approved a motion early on Dec. 24 announcing 2021 as the year of the Turkish national anthem.

Turkey slammed a "racist threat message" on Nov. 28 in northeastern Greece written on an elevator of an apartment building that is the residence of Mufti Ahmet Mete of Xanthi.

"As the political parties that have parliamentary groups in the Turkish parliament, we strongly condemn the French Senate's resolution on Nov. 25, 2020 that has been approved in defiance of the law, morality and fairness," read the declaration.