Greek authorities say two Afghan men have been jailed for six years and nine months each after being convicted of participating in riots this week at a migrant detention center near the border with Turkey where some 150 unaccompanied minors are being held.

Two men accused of gang-raping and murdering 21-year-old university student Eleni Topaloudi on Rhodes in November 2018 lured her to her death "like a lamb to the slaughter," a prosecutor told a court on the southern Aegean island on Wednesday.

An award-winning journalist with the record of investigating local corruption in Bulgaria has accused the local authorities of framing him after he was charged on Tuesday with the illegal possession of drugs.

Prosecutors in the town of Silistra filed charges against Dimiter Petzov on Tuesday for possession of drugs and ordered the imposition of restraining measures.

The Federal Bureau of Investigation (FBI) has accidentally disclosed the name of a Saudi diplomat suspected of aiding two Al-Qaeda hijackers in the Sept. 11, 2001 terrorist attacks on the U.S., Yahoo News reported on May 12. 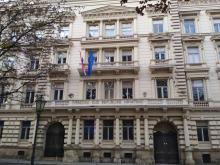 The Croatian Supreme Court announced on Tuesday that it has confirmed the verdict sentencing former army officer Josip Krmpotic to three years in prison for committing war crimes against civilians during the 'Medak Pocket' operation in southern Croatia, but acquitting him of failing to prevent the killing of prisoners of war.

The Greek state will not appeal against a lower court ruling that awarded damages totalling 2.24 million euros to the families of the victims of a firebomb attack on a branch of Marfin Bank in central Athens ten years ago.

Morning prayer and church attendance by pupils in kindergarten and primary school do not violate the Greek Constitution and therefore it is legal to keep them in place, the Council of State said on Friday.

Greece's top administrative court, the Council of State, rejected for the second time an appeal by Hard Rock International against its exclusion from the tender for the Elliniko casino permit.