Ramic spoke English and he became one of several young people who managed to feed their families by working as interpreters for UNPROFOR or other international organisations such as the UN refugee agency, UNHCR.

But while working as an interpreter, he had to witness some traumatic incidents, such as an artillery attack on the village of Konjevic Polje.

The World Health Organization said on July 9 that there was a "likely causal association" between coronavirus vaccines using mRNA technology and "very rare" heart inflammations, but the benefits still outweigh the risks.

Turkish provocations of the Republic of Cyprus are unfortunately not over.

The recent EU summit may have noted in its conclusions that we are in a period of de-escalation in the Eastern Mediterranean, but that does not at all reflect what is going on in Cyprus.

None of the conflicting parties shy away from that practice, but a far larger number of children are still being recruited by Houthi people, writes DW.
Samir was eventually killed. The 15-year-old paid with his life for the desire to fight on the side of the Houthis in the civil war that is being fought in Yemen.

The decision by the UN court in The Hague last month to uphold the life sentence handed down to former Bosnian Serb military chief Ratko Mladic takes the number of life terms imposed for involvement in the Srebrenica genocide to five. 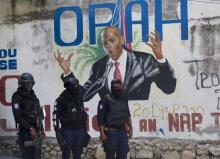 In last night's statement, the Council called on all political actors in Haiti to refrain from any acts of violence and incitement to violence, and also requested that the perpetrators be brought to justice, Reuters reports.
It was also announced that the Security Council will discuss the assassination of the President of Haiti at a closed-door meeting today.

Kosovo MPs adopted a resolution on Wednesday officially recognising the 1995 Srebrenica massacre as genocide, only days before the 26th commemoration of the slaughter of Bosniaks by Bosnian Serb forces.