"Serbia must bear in mind its interests"

BELGRADE -- Serbia wants to be an EU member and we are aware of our obligations on that path but we have to bear in mind our national interests as well, says Ivica Dačić.

BELGRADE - Serbia wants to be an EU member and we are aware of our obligations on that pathway, however we have to bear in mind our national interests as well, Ivica Dacic, Serbia's first deputy prime minister and foreign minister, stated on Sunday.

BELGRADE - Ivica Dacic, Serbia's first deputy prime minister and foreign minister, stated on Saturday that Serbia will pursue an independent foreign policy by the time it becomes a full-fledged member of the EU.

Former Prime Minister Sali Berisha on Thursday called for a parliamentary inquiry into claims that the centre-left government of Premier Edi Rama has imported oil from Teheran, breaking the UN-imposed embargo.

“The government has breached the embargo by allowing imports of oil from Iran, a grave national and international act,” Berisha said during Thursday's parliamentary session.

BELGRADE - Serbian Minister of Labour, Employment, Veteran and Social Affairs Aleksandar Vulin meet with a delegation of the International Labour Organization (ILO) at the Serbian government on Wednesday, discussing important topics such as plans for drawing up social maps and amendments to Serbia's Labour Law.

Maternal deaths have fallen by 45% worldwide since 1990, statistics of the UN and the World Health Organization (WHO) show. 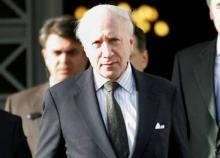 United Nations mediator Matthew Nimetz is to visit Athens and Skopje at the beginning of July after meeting representatives of Greece and the Former Yugoslav Republic of Macedonia (FYROM) in New York on Tuesday.

Senior officials from Russia and the European Union visited Serbia on Tuesday, adding to pressure on Belgrade to define its stance more clearly over the conflict in Ukraine.

BELGRADE - Establishment of a Kosovo army would increase the lack of security for Serbs and other non-Albanian communities because it would, in fact, be a successor of the terrorist "Kosovo Liberation Army" (KLA), Milovan Drecun, the former chairman of the Serbian parliamentary committee on Kosovo-Metohija, said on Tuesday.

VIENNA - Serbian Foreign Minister Ivica Dacic has said that Serbia cannot impose sanctions on Russia, as Moscow has never introduced sanctions against Belgrade, underlining that Serbia is trying to take a balanced position in relation to Ukraine.